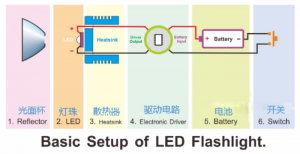 To show how it works.

The reflector profile is the most important aspect in if the beam tightly focussed or spread out to give flood light. Deep reflectors typically create a tight spot and shallower reflectors a flood beam. The reflector surface finish then goes towards smoothing out the beam (using a textured surface) or reducing losses (with a mirror finish) but potentially having artefacts in the beam.

2. LED – Light-emitting diode, the modern Led is much brighter than Incan bulb and life span is much longer too. The efficiency or brightness of Led will be improved ~30% every year.

3. Heatsink – Cooling is required to remove the waste heat produced by Led. Consequent heating according to workload.

Brighter = Hotter. Nowaday the metal body of flashlight use as heatsink.

4. Electronic Driver – control the power and signal to led.

The driver play a very important role here, because the led need ~3-4V only, but the battery capacity will drop according to life.

6. Switch – Control On and OFF, change power level

– light comes on before it clicks

– light come on after it clicks